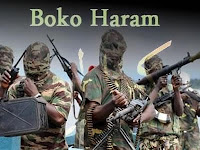 There is a school of thought which believes that this is a game gone sour, do you believe them? whether you believe them or not, and whether it is true or false, time is a better judge as we keep our fingers crossed waiting for more time to elapse.  They said that #Boko is the name of the game and Amnesty is the goal. To score the goal, you first need to be taken serious and so you must do it all with #every every and when things go out of hands the referee will put his whistle in his mouth and point to the center circle, it is game over and the players who scored the goal will go home with the trophy: the blessings of a #federal #amnesty. Those who got it first did so with a legitimate demand or don't you think so? so says the same school of thought and those who think they deserve it too are now in the field, will they get it at last? others are still watching to see what happens. For some others like us, some where in our hearts we earnestly wish that the end of this game
Post a Comment
Read more

- August 04, 2015
#Buhari please probe # Jonathan's administration, we the poor masses need a president who has the guts to really fight corruption to a standstill, someone with enough balls to step on toes, not just talking and playing to the gallery, if you are that man then the time to start is now but don't start with Jonathan, that is pure witch-hunt, we all no that, to start with him is to confirm our fears that you are still aggrieved because he stopped you from being president the other time and gave you a good fight this time. If you don't know where to start, why not start with  #Babangida , probe all the contracts that he awarded in the construction of Abuja, probe the sale of our crude oil during the gulf war, probe his ministers and officials, because that man is super rich, how did he come by those wealth, probe the source of his wealth and confirm to us that he is clean.  Probe all the ministers and political appointees of # Sani Abacha , including all contracts he awarded
Post a Comment
Read more

Babywearing Around Tulsa: Babywearing: Lots of Ups and Downs

- August 03, 2015
Babywearing Around Tulsa: Babywearing: Lots of Ups and Downs : We started out on our babywearing journey with an Ergo I found on Craigslist while I was still pregnant with my little man. It was a great...
Post a Comment
Read more

Welcome to Uju Edochie's Blog: Buhari: Boko Haram will be wiped out this year