''when the mouth can not speak for the heart...'' i believed there were things hidden deep within and only felt through the eyes.

- September 26, 2015
He stood up gradually, partially bent over on his walking stick
why he chooses a stick taller than he is, i can not tell but
as usual with a cutlass on his right and the stick on his left
he is on his way to the farm, an old but strong man

when he walks, it is as if, He is going to tumble over
but he never does, he takes it one step at a time
till he gets to the farm
a brave old man 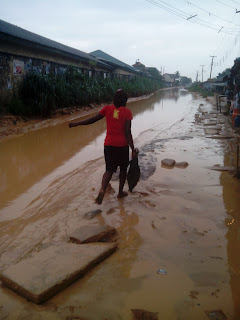 still rooted there holding his stick

then He looked up finally and said,
that war!, that war!!, then he heaved a sigh
looked up to the sky
my son! we saw something

He shook his head slowly
no no no it was terrible
where is this radio, my son.
London. i replied.

then He shook his head again
they will close it,  he said
before moving on
one step at a time.