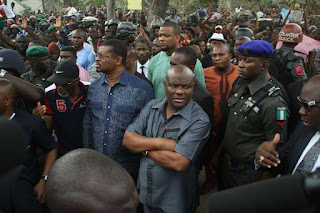 #Governor of #Rivers State Nigeria, Nyesom #Wike on a visit to Yeghe, Ogoniland, after the Army invaded the community in search of militants. houses where demolished and lives lost.

While urging the Ogoni people not to take the laws into their hands, Governor Wike said: “All those who masterminded these killings will face justice. They are busy causing crisis because of their evil plan to declare a state of emergency in the state. Since they failed in my case, they will fail in others because God is greater than them”.
Governor Wike noted that he has always advised the military to arrest criminals and hand them over to the police for prosecution in line with the rules of engagement and not to take actions that would harm innocent citizens.
He denied ever making inflammatory statements on the Ogoni political arena, saying that he only campaigned for his political party. According to him, it is within his political right to guide the people on the electoral choice they have to make in the interest of the state.
Governor Wike said that the state government will hold a comprehensive security council meeting on Thursday on the Ogoni Security Situation. 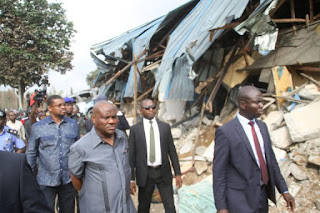 A statement by Simeon Nwakaudu, Special Assistant to the Rivers State Governor on Electronic Media noted that thousands of wailing bereaved widows, youths, children, widowers and traders at Yeghe and Bori displayed photographs of loved ones killed by soldiers. They also displayed placards condemning the military operation that claimed the lives of their loved ones.He urged those who fled their homes to return as his administration has taken measures to check a repeat of the ugly incident.Bari Zikpo, a retired police officer, told the governor that his first son was killed in the ill-fated operation by the military. He said the operation claimed many others in the town.In Bori, David Gbarazie informed the governor that he lost his brother to the military operation.Also in Bori, the Igbo community also informed the community that the military killed some traders in front of their shops. Spokesman for the Igbo traders in Bori, Mr Michael Akuchi said a trader Livinus Nwafor and his brother Kelechi Nwafor were killed by soldiers... more from http://www.igberetvnews.com/
copied from igberetelevision post on facebook.