- December 14, 2016
How can you describe this scenario, they fought with the last drop of their blood to become the Champions of Africa for the 8th time, defeating the host Cameroon to lift the trophy right their before their fans. 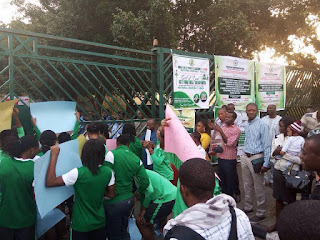 The Nigerian ladies celebrated like hell, they must have been very happy, they must have expected a very wonderful welcome party at home, how the Captain must have dreamed of the moment when she would hand over the cup to the President, with all the glits and glamour.

How would they have imagined that they would have to beg for even their match bonuses and allowances, pity, now they are on the streets protesting to be paid. There is a report that the  sports minister went on air to say that they are being owed because no one anticipated that they would win, pity, so the sports ministry was actually praying for them to fail. They expected it to be another jamboree as usual, then they would blame the coaches and relieve them of their duties. Another round of interviews would be held the next time around and another coach would be appointed on a bloated contract terms of  which the coach would only get a percentage of the total sum. 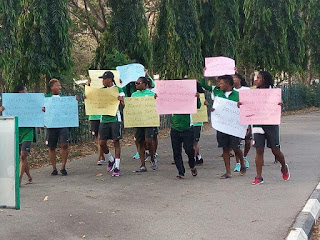 Imagine the mentality, and the same Sports Minister is advocating for a simple ''Thank You" to our sports men and women, what a pity!!! some of them get injured in the process and are abandoned for their clubs, some end their career on the pitch and that is that, simple bonuses and allowances to encourage them to do more is now a crime but these political appointees all earn bogus salaries and allowances which can not be sacrificed on the alter of recession and patriotism.

Solomon Dalung should lead by example, he should start by fore-going his allowances in the name of being patriotic, after that our sports men will follow.