Dead whale towed off Los Angeles beach ahead of holiday Full credit to  JOHN ANTCZAK of Associated Press for the news we are sharing here. Comments   Sign in to like   Reblog on Tumblr   Share   Tweet   Email LOS ANGELES (AP) — The reeking carcass of a dead humpback whale was towed back out to sea some 24 hours after washing up at a popular Los Angeles County beach Friday. Authorities used boats pulling ropes attached to the tail to pull it off the sand during the evening high tide, taking the whale far out to sea and avoiding a foul stench and grim scene on the beach as Fourth of July weekend crowds began arriving. Authorities had earlier attempted the procedure at midday, with a bulldozer pushing, but it was unsuccessful because of the low tide. The huge whale washed onto Dockweiler Beach, a long stretch of sand near the west end of Los Angeles International Airport, just before 8 p.m. Thursday and holiday beachgoers began arriving in the morning. Lifeguards posted yellow caution tape to keep people away and
Post a Comment
Read more

Why Are Women’s Shirt Buttons on the Left? #copied from https://www.yahoo.com/style/why-are-womens-shirt-buttons-on-the-left-150743135.html 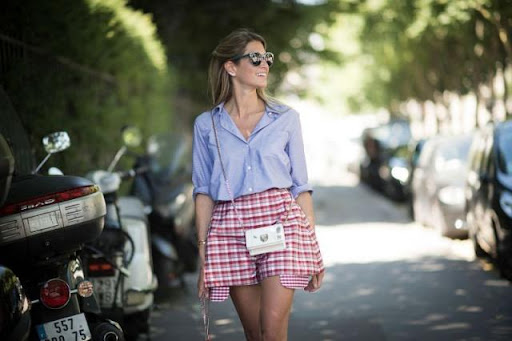 #copied. Lifestyle Yahoo Style Staff   10 hours ago   Comments   Sign in to like   Reblog on Tumblr   Share   Tweet   Email Seriously, why are the buttons on the left? (Photo: Timur Emek/Getty Images) If you’ve ever compared a woman’s button-up shirt to a man’s, you’ve probably noticed that the buttons are on the opposite side. But have you ever wondered why? An age-old theory is that it all has to do with the well-known fact that women can’t dress themselves. I’m kidding, of course (I dress myself nearly every day!), but many moons ago, it was a lot harder for females to get dressed. As  LiveScience   puts it : “Depending on the era, men might wear waistcoats, pantaloons, gaiters and wool jackets. But women’s clothing was far more elaborate, and could consist of a dozen or more garments including petticoats, bloomers, gowns, corsets and bustles. Thus, especially in middle- and upper-class society, men generally dressed themselves, whereas women did not. Instead
2 comments
Read more

Captain ELECHI AMADI is dead, he was a renowned novelist, poet and dramatist. He died on Wednesday  at the age of 82 in Port-Harcourt, Rivers State.  His works included the Concubine, The Great Ponds, Peppersoup, Sunset in Biafra, The Slave etc Elechi Amadi was born on may 12, 1934 in Aluu community in Ikwerre Local Government Area of Rivers State.  A graduate of University Colledge Ibadan, after graduating from Government College Umuahia.  You may wish to know that Elechi Amadi fought the Nigerian Biafran war under the dreaded 3rd Marine Commandos of the Nigerian Army.   Funny enough, Elechi Amadi told Nigerians during one of the settings of Justice Oputa Panel that he was not an Igboman. He went further to say that his name Elechi Amadi is not an Igbo name but rather an Ikwerre name and that the Ikwerre people are not Ndi-Igbo and that the language they speak is Igboid and not Igbo.  Probably he is one of those who was trying to make the Ikwerre's believe that they migrated
Post a Comment
Read more

Power in the Blood... why i had to re-share this.