Breaking: Nnamdi Kanu of the indigenous people of Biafra is said to be sponsoring a football competition for Kuje Prison Inmates.

- July 31, 2016
Pictures has emerged on social media showing the leader of the Indigenous people of #Biafra, #IPOB and director #Radio Biafra, Mazi Nnamdi Kanu -who has been held in prison custody by the Nigerian Government ever since he was arrested and is presently defending himself in court- with prison Officials and Inmates.
The pictures was supposedly taken when #Nnamdi Kanu declared open a football competition for his fellow prison inmates.
Nnamdi Kanu is said to be financing the football tournament that is aimed at fostering unity among inmates and giving them the opportunity to have a little freedom and possibly discover their talents and turn a change for the better. 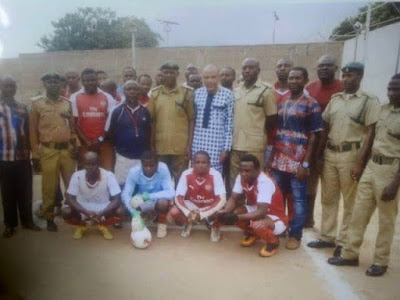