- July 27, 2016
How much are we earning from the importation of Cattle into Nigeria? Importation of Cattle into Nigeria has completely wiped out local production in Beef(cow meat), Pork(pig meat), Mutton(sheep's meat) and Chevon(goat meat).
Most Cattle in Nigeria are imported from Niger, Chad and Cameroon and these people simply move it across the border and then down south of Nigeria. Today, they no longer import only Cattle, they equally import Cattle rearing Expatriates from neighbouring countries, a very violent set of people who behave as if they are still in their jungles where no law and order exists.
The resultant effect of their presence in our country is Cattle rustling, killing, raping, maiming, murder, destruction etc.

well, that is not the interest of this write up for now.
Has it not gotten to the point where the importation of cattle into Nigeria would be out rightly banned to encourage local production? or atleast import duties are imposed on them. Imagine how much Nigeria would be earning from import duties on imported cattle.
Will the cabals controlling the cattle trade in Nigeria allow that? these people are making billions of Naira everyday from the importation and sale of cattle within Nigeria.
Every other form of local meat in Nigeria has gone into oblivion, the only thing Nigerians know is Beef. 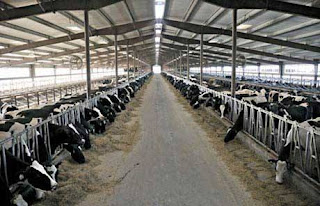 Don't say am biased but here we try to present raw facts to the best of our ability, alot of items imported into the country by Southerners are either banned or have high import duties slammed against them all in a bid to protect local production.
This policy should be extended to imported cattle because lots of cattle here are imported and doing so would equally protect local production. All live Cattle in Nigeria should be inspected and certified fit for human consumption by Vet. Doctors before they are killed and sold to consumers.  Our Abattoirs should equally be upgraded to meet the minimum international standards and movement of meats across the country should be streamlined especially now that the country is looking for ways to increase revenue. This will equally make it possible for stolen cattle to be tracked thus solving the issue of stolen cattle, as well as knowing the herdsmen and who they are working for.