- August 12, 2016
Fresh hope, Thursday rose for members of the Indigenous People of Biafra, IPOB as the federal government of Nigeria, through the Attorney-General and Minister of Justice released all their members who were arrested by various security agencies in Aba, Abia state, during their prayer rally in February, this year and clamped into detention camps and prison custody.
Consequently, the release of their members threw the IPOB members into jubilation in various parts of Onitsha, 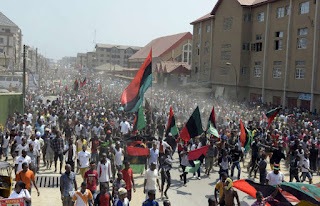 Anambra state, although the jubilation did not take place publicly as they did when a court granted their leader, Nnamdi Kanu bail, sometime last year. In a press statement issued to newsmen Thursday in Onitsha, IPOB’s Media and Publicity Secretary, Emma Powerful who confirmed that their members have been released, said all IPOB members worldwide under the leadership of Mazi Nnamdi Kanu, the Director of Radio Biafra were commending the Attorney-General of the Federation, AGF and all those who have common sense to understand that all those arrested in Aba must be released.Read more at: http://www.vanguardngr.com/2016/08/ipob-jubilate-onitsha-fg-releases-detained-members-aba/