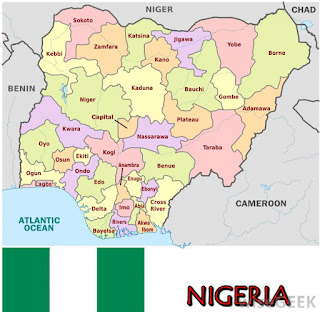 Again they say that some States are South-South of Nigeria and such States include Edo State, isn't that madness, looking at this Nigerian map with your little knowledge of geography, how can Edo State (look at its position on the map) and Cross River State, be a South South State and yet Imo State(look at its position on the map) is not a South-South State, does that make any meaning to you. If Cross River State can not be in the same geo-political zone with Ebonyi and Enugu then what they are calling Southeast States now (Abia, Anambra, Enugu, Ebonyi and Imo) should be renamed as South-Central or East-Central because they can never be South-East without the inclusion of Cross River State.
Goe-political zones in the South should not be based on tribal sentiments because geographically Taraba State has no business being in North-East, as a matter of fact as you see it in the map, it should have been included in North Central. looking at that map, Imo Sate, Nigeria and others are not part of South-East if Cross River State is not part of South-East period.
Why is it that we don't have North-North States in Nigeria and yet we have South-South States. Why is it that we have North-Central States and yet we don't have South-Central States? The answer is tribalism and ethnic jingoism and both are the tap roots of corruption which #APC and President #Buhari should be championing. Trying to fight #embezzlement of #public #funds is like trying to cure the symptoms of #Malaria while allowing the root causes of the sickness to fester. Treating symptoms no matter how long can not eliminate the disease, it is like chasing shadows but if you treat the root cause of the sickness, the symptoms will disappear for good. The problem of Nigeria includes over centralization of power in the hands of one man at the center and a fraudulently structured entity that is aimed at robbing peter to pay paul. This year at #Euro 2016, we all watched England play against Wales with different flags and anthems and yet both are part of the same country called #Britain with the same Armed Forces and #Prime Minister. Macau and Hong Kong are both autonomous regions of one big China. If the States of Nigeria can exercise have the powers of the States in the USA, corruption and ethnic strive in Nigeria would become insignificant. It will take a man who is truly Nigerian in words and in deeds to attempt at re-structuring and re-creating Nigeria, a man who has the guts to say the truth and stand by it without ethnic or religious sentiments, a man who believes in equal opportunity for all Nigerians whether they voted for him or not. Only a recreated Nigeria will thrive.