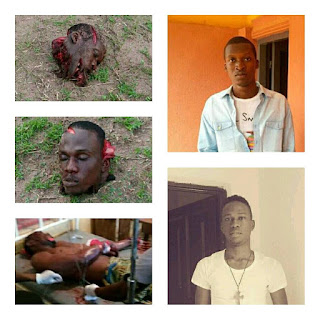 ‪#‎ ABSU‬  BEHEADING UPDATE This is the full pictures of the beheaded students in Abia State University Uturu. The cult war is on. We gathered via a reliable  source that the University VC was summoned yesterday by Gov. Okezie Ikpeazu, consequent upon that a security meeting will be held today in the University which will include the Nigerian Army and Nigerian Police. The students beheaded are Samuel (Political Science, 300 level) and Chukwuebuka Benedict Nwaigbo (Estate Management, 300 level). AFN also gathered that a third person was in the room during the said attack but was not beheaded because he was not a member of the cult group targeted. He is critically injured and hospitalized as at now. (The picture is also attached). source:  Abia Facts Newspaper 's  photo . What will their parents do now? they where sent to school to acquire knowledge and become a blessing to themselves, their family and their society but they have now graduated to the great beyo
Post a Comment
Read more
More posts