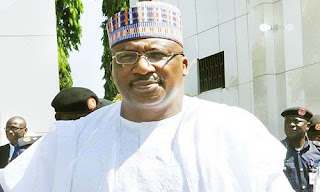 Those involved in the Ife #Yoruba and #Hausa/Fulani communal conflict to be prosecuted... Minister of Interior, #Abduramen Dambazau.  Why investigate and prosecute them sir? because human beings died.  So those being slaughtered in #Benue State and Southern #Kaduna are mere monkeys and baboons, that is why nobody is prosecuting anybody.  Until it involved the Yoruba, I didn't even realize that we had a minister of interior, now leaders of Hausa/Fulani had to visit the Yoruba leaders in Ife for peace talks because of A, B and C.  Benue and Southern Kaduna communities needs to study this Ife conflict and ensure that next time the killers arrive that the Minister of #Interior would have a reason to investigate and prosecute those responsible. +Nigeria We Serve    +BBC News   +BBC Africa   +VOA News   +CCTV Africa   +CNN International   +ABC News   +AFP news agency   +Reporters sans frontières   +United Nations   +United Nations Human Rights   +Channels Television    +S
Post a Comment
Read more
More posts