- July 16, 2016
Islamic fundamentalist attacks directed at Christians are on the rise across northern Nigeria. A couple of days after Mrs Eunice Olawale a female Pastor with the Redeemed Christian Church of God was brutally murdered by Muslim #extremists, another set of Muslim fundamentalists has attacked St. Philips Catholic Parish Baki Iku, in Niger State Nigeria destroying properties worth millions of Naira. According to information gathered by http://www.thisdaylive.com/index.php/2016/07/16/over-200-muslim-youths-run-amok-destroy-catholic-church-near-abuja/, the extremists had attacked the Church because according to them, "Christians do not have the right to worship their God on Friday, they claimed that Fridays are for Muslims only''.
Many worshipers including security men were beaten to pulp and Church properties destroyed. According to reports, about 200 extremists came out from their Mosque after their Friday prayers and stormed the Church premises. Similar attacks are on the rise in Northern Cities of Nigeria, most has been reported to the Police who claimed arrests had been made and even paraded suspects to news men yet after all the media hypes, these perpetrators are yet to be brought to book. 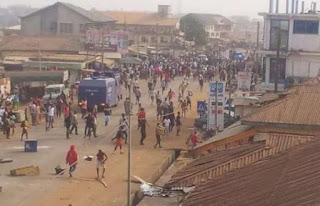