……we’ve no case to answer, defendants insist By Ikechukwu Nnochiri ABUJA – A lead investigator with the Department of State Service, DSS, Mr. Babatunde Adepoju, on Tuesday, revealed before an Abuja High Court at Maitama, that a lawyer that represented President Muhammadu Buhari during his certificate saga, offered N500, 000 to Justice Adeniyi Ademola who is facing corruption charges. President Muhammadu Buhari Adepoju testified as the sixteenth prosecution witness, PW- 16, in the ongoing trial of Justice Ademola, his wife, Olabowale, and a Senior Advocate of Nigeria, Mr. Joe Agi. The defendants are answering to an18-count corruption charge the Federal Government preferred against them.

The embattled Judge who hitherto served at the Abuja Division of the Federal High Court before he was asked to temporarily step down from the bench by the National Judicial Council, NJC, was among other allegations, accused of receiving gratifications from Agi to the tune of N38.5m, including a BMW Saloon 320i car gift valued at N8.5million. 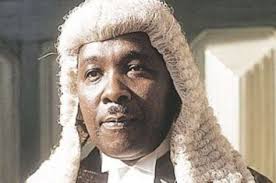 The Judge allegedly received the car which was purchased from Coscharis Motors Ltd on January 5, 2015, through his son, Ademide. At the resumed hearing of the case on Tuesday, the PW-16, told the trial court that investigation by the DSS showed that the N8.5m car was not the only gift the first defendant received from persons whose cases were pending before his court. While being cross-examined by Agi’s lawyer, Mr. Jeph Njikonye, the witness, told the court that the security agency uncovered that President Buhari’s lawyer, Mr. Kola Awodehin, SAN, also gave the accused Judge N500, 000 as gift. He told the court that the monetary gift was handed to Ademola during the wedding of his daughter.

The DSS operative said the issue came to the limelight during interrogation of the 3rd defendant, Agi, SAN, which took place on two separate dates, December 13 and 23, 2016. He said Agi maintained that N30m gift, which was paid into Mrs. Ademola’s account in three tranches of N10m, was based on instruction of his clients, adding that it was not the only wedding gift the judge received. The witness said that Agi told him that as at the time Awodehin, SAN, gave the gift to Justice Ademola, the suit seeking to sack President Buhari from office over his alleged none possession of requisite educational qualifications, was still pending before the judge. Adepoju said the DSS did not investigate Agi’s claim. Nevertheless, Agi’s lawyer, Mr. Njikonye, tendered the Certified True Copy, CTC, of the record of proceedings in the certificate saga suit between Chukwu Okafor vs General Muhammad Buhari. Trial Justice Jude Okeke admitted the document into evidence and marked it as Exhibit FFF.
Read more at: http://www.vanguardngr.com/2017/02/buharis-lawyer-gave-justice-ademola-n-5m-certificate-saga-witness/